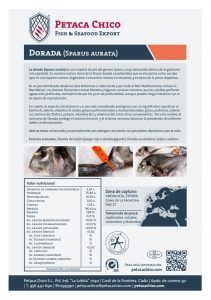 Gilt Headed Bream (Sparus Aurata) of the Sparus family a d widely consumed in the Spanish cuisine. Its common name comes from the characteristic feature on its face between both eyes. It is a coastal species found even in estuaries, and is the fish used typically for the sport of fishing.

Distributed from the British Isles and all the Mediterranean, including the Mar Minor. The young fish are found in coastal areas whilst the adults prefer deeper waters, up to 30m, although they can be found in up to 150m deep waters.

The nutritional value of this fish is semi fat with a significant supply of E, selenium, vitamin D,  polysaturated and monosaturated   fatty acids , proteins, cholesterol,  vitamins B12 and B6. For this reason, Dorada provides protection to the immune  and nervous systems and prevents cardiovascular illnesses.