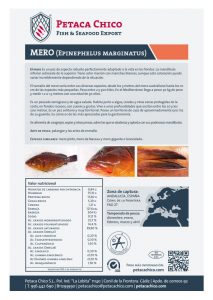 Grouper (Epinephelus marginatus) a robust looking fish perfectly adapted to living on sea beds. The lower jaw is bigger than the upper. It is a brown colour with white marks although the colour can vary depending on the situation.

The Grouper’s size varies among the different species, from the Australian grouper of 3m down  to the 10cms of the smallest. Weight also varies from 2kg to 300kg. They can reach  an average of 50kg in the Mediterranean and measure between 1.2m to 1.5m at the age of 50.

It is a semi fat fish. Its habitat is among algae, coral, and other protected areas of the coast on rocky sea beds with caves and hiding places. It lives at between 20m and 200m and is a solitary and territorial fish. It uses a hunting area of approximately 500m2 around its home area. Grouper meat is highly appreciated in the gastronomy industry. Its diet is composed of crabs, squid and other similar prey and hunts by hovering over and crushing them with its powerful jaws.