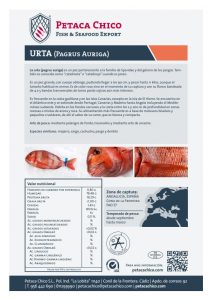 Sea Bream (Pagrus auriga) a member of the Sparidae family and  part of the sea bream/snapper species. Also known as “catalineja or catalineta” when young.. it is a large fish with oblong body up to 90cm  long and weighing up to 11kg,  although the normal size is smaller. It is a rose wine colour when caught and has 4 to 5 transversal red/brown stripes on its flank.

Frequently found on the Cadiz coast and in all the Canary Islands except El Hierro. It is found also in the eastern Atlantic and extends from Portugal, the Canaries, Madeira to Angola, including the southeast Mediterranean. Its habitat is near to the coast at between 2m and 200m depth and on rocky or mixed sand and mud sea beds. Its normal food is based on bivalve mollusks and small crustaceans, from which it gets its tasty meat, which is white and compact.