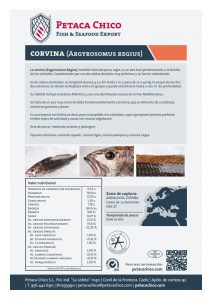 Seabream (argyrosomus regius) is also  known as “perca regia and is from the scienidos especies.

Characterised by its two close dorsal fins and rounded mouth.

Silver in colour. Length from  4-5dm up to 2m, weighing between 10kg and 40kg. Found in sandy sea beds and moves alone or in groups in depths of up to 200m. Normal habitat is the Atlantic Ocean with a small presence in the Mediterranean. Fundamentally carnivore based on crustaceans, molluscs, worms and fish.

It is eurihalina  meaning not susceptible to saltiness , so the young  prefer to develop in low salt levels and  in areas with abundant vegetation.