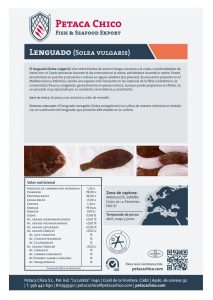 Sole (Solea vulgaris). It lives on sandy or muddy seabeds , close to shore, up to 200m depth. It rests under the sand during the day and is active at night. It can be found in harbours and estuaries, and in salty waters (including the young).

Present in the Mediterranean and the Atlantic and one of the most captured by the Southern Atlantic fleets. Marketed both fresh and frozen, generally as whole fish, although it can be prepared as fillets. Sole is widely appreciated as being an excellent white and consistent fish.

It is an important fish in the food industry and can be found frequently in commercial and recreational fishing practices.